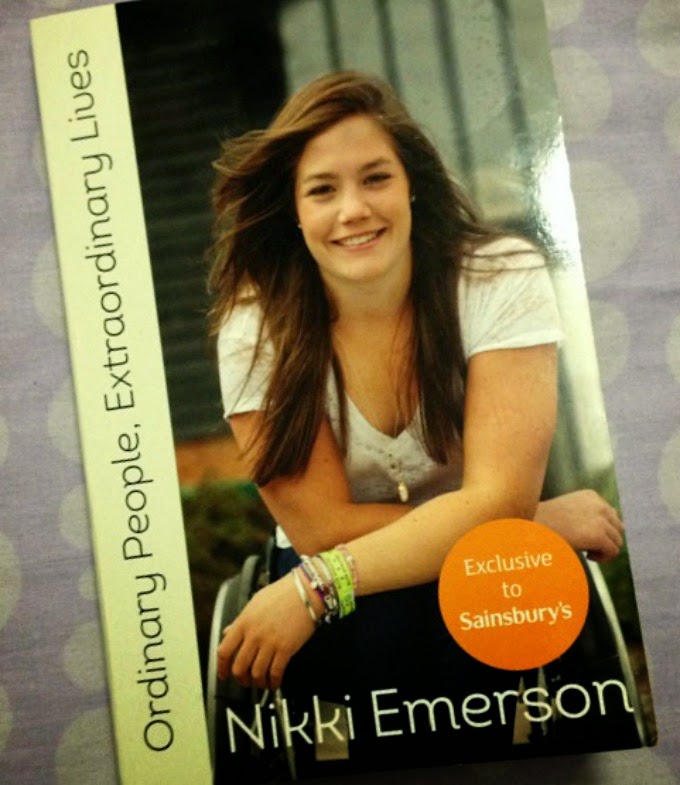 In 2008 Nikki Emerson was driving back from university when she had a near-fatal car crash which broke her spine. Nikki spent ten weeks undergoing intensive physiotherapy and was told she’d never walk again. During this time in hospital she watched the Beijing Paralympics and was inspired by the athletes she saw on screen to take up Paralympic sport. She now competes against these same athletes internationally.Nikki has won four medals at the 2010 U23 World Track Championships, bronze in the Great North Run and the end of the 2010 season she was ranked 6th in the world for the T53 800m and 7th in the world for the wheelchair marathon.Riveting and revelatory, Nikki describes her struggles to adapt to her new life with honesty and humour. Hers is a story of an ordinary girl whose life, despite adversity, has become extraordinary.

This isn’t typically the kind of book that I would pick up for myself, but I was lucky enough to get given it as a Christmas present last year and I finally had the chance to start reading it this week. I say start, I actually completely read it in one day; partially because it isn’t particularly lengthy but mainly because it gripped me and I just couldn’t convince myself to put it down. I will admit that it isn’t very well written and there are moments when it can get a bit confusing as the narration switches between the past and the present but Nikki never claimed to be a writer, she was just given the chance to tell her tragic, yet incredible story.
A book following a topic like this could very easily become quite upsetting and I was a bit on edge when I first started reading it as I wasn’t sure if I was going to be able to finish it, but I soon found that with Nikki’s own personality seeping through everything she wrote and her humour quite often filling the pages the book was in fact much more uplifting and inspirational than anything else.
However, contrary to what you might think this definitely isn’t just a book that is inspiring to those who have found themselves in the same situation as Nikki, but it is one to stop and make everyone who reads it think and appreciate their own lives a little bit more. If you’re stuck in a bit of a rut at the moment and need a bit of inspiration, I would highly recommend you pick up this thought-provoking book.
(Visited 109 times, 1 visits today)
Leave a comment

Book Review: The Idea in You

Book Review: How Not To Travel The World by Lauren Juliff

I’m based in the Buckinghamshire countryside, where you’ll more often than not find me out in a field with a pair of wellies on or curled up by the fire with a cup of tea in my spare time.
Find out more…